‘Boers at the End of the World’ 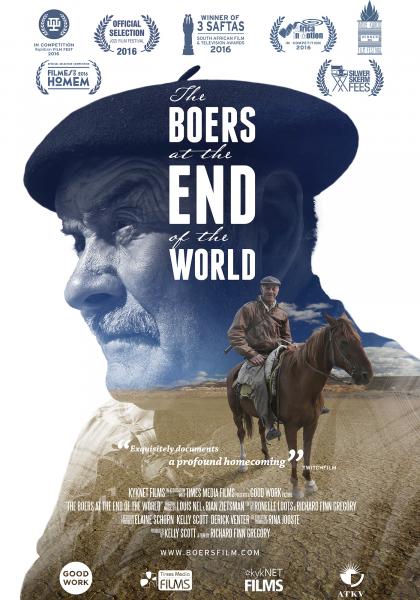 A vivid exploration of family and historical connections across an often overlooked diaspora of Boer Africans in South America, Patagonia, Argentina.

Artists: Director: Richard Finn Gregory; Producer: Kelly Scott. Languages: Afrikaans, Spanish, English. Richard Finn Gregory is an award-winning South African director and cinematographer. Focusing on documentary filmmaking, his projects have spanned five continents, from work in South Africa to Tokyo, where he lived for a number of years. Much of that work centers on social and environmental issues in the developing world. And he was the last person to film Nelson Mandela in a private setting, as part of the 21 Icons project.

Description: The film focuses on a family, the Dickasons, who have a deep yearning to see the land of their ancestors. A main protagonist, Ty Dickason, 82, is a cowboy in remote Patagonia, Argentina, having never flown in a plane, yet speaking a language from a country 7,000km to the east. He is part of a 114-year-old Afrikaans community – more commonly known as the Boers (“farmers”) located in South Africa. In 1902, after a devastating war with the British, several of the Boers sailed across the Atlantic to start a new life of “freedom” in the arid heart of Patagonia, a land that reminded them of home. Today, their descendants, like the Dickasons, sing old folk songs, the oldest attempt to still speak an archaic form of their mother tongue, and they live in a parallel world of Afrikaans society, disconnected from the Apartheid policies that further developed in South Africa. As the film unfolds, the Dickasons travel back to South Africa for their first time, to meet distant members of their family – and their ideas of home, culture and belonging will never be the same.